Divergent selection and adaptive phenotypic plasticity can jointly influence phenotypic differentiation within and among populations. Understanding how these processes interact is difficult when the same environmental differences that lead to divergent selection can also promote phenotypic plasticity. Previous work has shown that pigmentation of the freshwater isopod Asellus aquaticus varies with background colour (Hargeby et al. 2004). This is hypothesized to be an evolutionary response to visual predation along a gradient of differently coloured macrophyte-backgrounds.

Figure 1 - Mesocosm setup: we manipulated presence and absence of macrophytes and fish using 50 mesocosms (1000L). We then reared individuals of a stock population from Lake Lucerne with a known phenotypic distribution (horizontal line in Fig. 2) in the mesocosms for six months, and then measured their phenotypes.

Figure 2 - Left: Macrophyte presence yielded higher pigmentation (size corrected) in isopods than macrophyte-free tanks, independent of fish presence. Each data point represents the average response for one mesocosm and the large dots with error bars are mean ± CI per treatment across all mesocosms with. The solid line indicates the mean starting condition, and the dashed lines show mean and SD of the starting populations, respectively. Mid: rates of increase in pigmentation were higher under high-nutrient diet (dots = weekly average change in pigmentation or body size of individuals across all families (mean ± CI), grey lines = family- level reaction norms). Right: In summary, results from both of our experiments suggests that pigmentaion can be affected by the presence of macrophytes, and by elevated protein content within the diet.

Inspired by the findings of our mesocom experiment and the associated laboratory study, we further investigated how diet driven developmental phenotypic plasticity could be result in divergent patterns of pigmentation. In a large scale laboratory experiment we reared over 1000 individuals from 29 families with two diets of contrasting nutritional quality (low/high protein concentration), and quantified developmental trajectories of body size and pigmentation for every individual for 12 weeks. 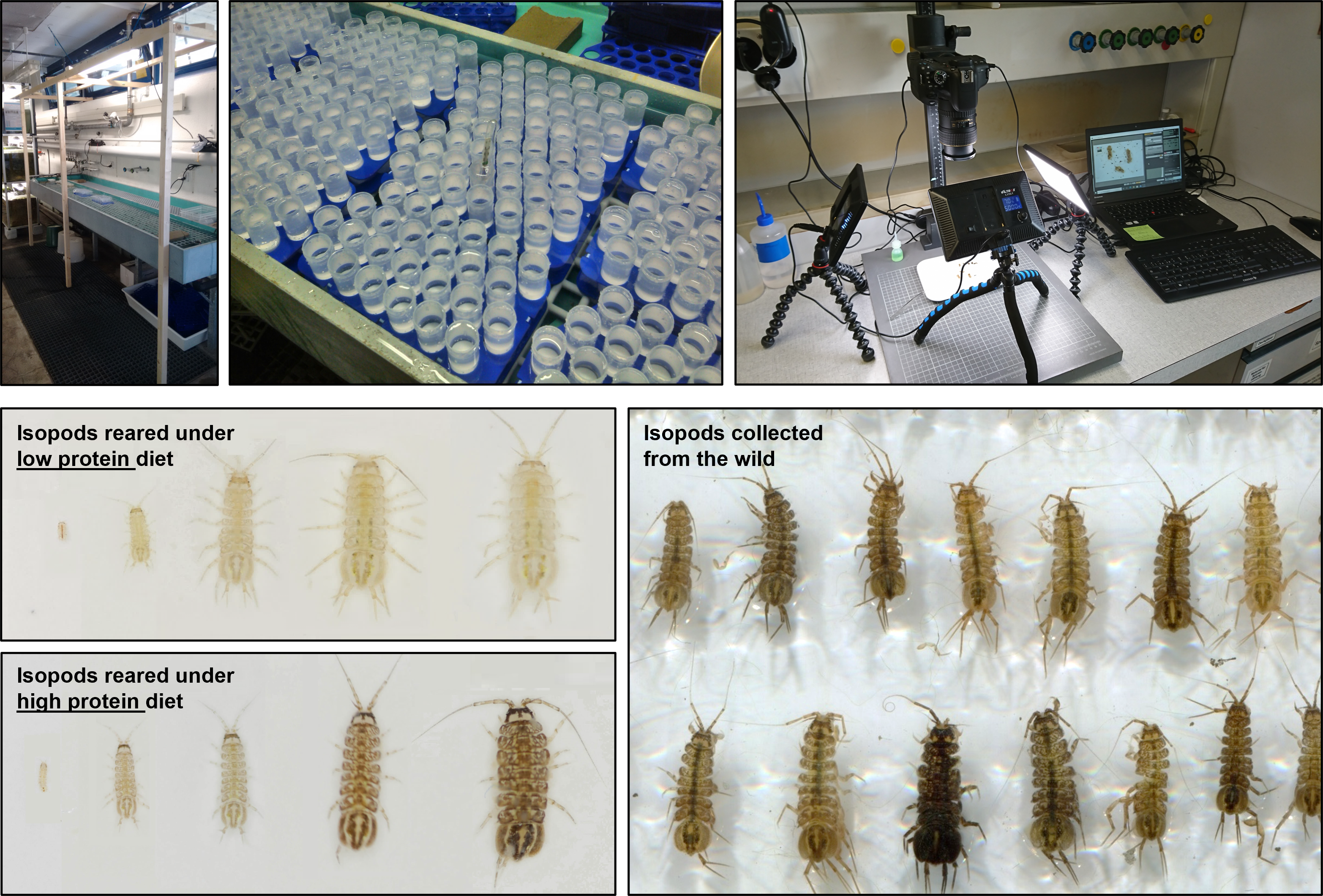 Figure 3 - Top row: Experimental setup to study developmental trajectories of over 1000 isopods in parallel. I used a large flow through system at Eawag Kastanienbaum (Switzerland) to control light and temperature for isopods reared in individual test tubes (50 ml). Every few weeks, the containers were moved to a phenotyping station, where the isopods were phenotyped with a high resolution DLSR camera, transferred to a clean test tube with new water and then returned to the setup. Bottom row: Example of two isopod siblings reared under low quality and high protein diet. The range of variation in adult isopod pigmentation after diet manipulation is falling well within the range of isopod pigmentation found in nature (to the right). 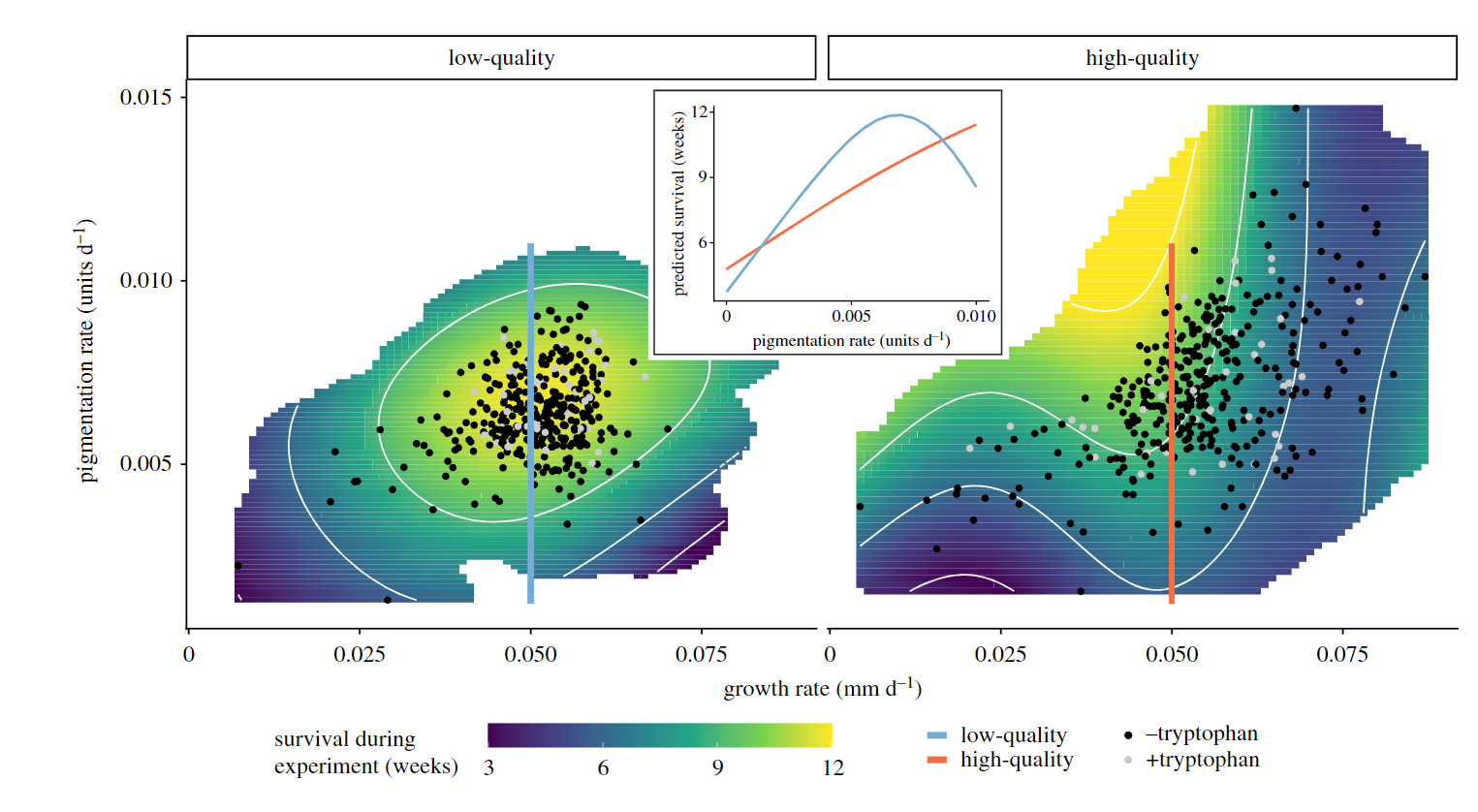 In summary, we found that genetic background and environment experienced during early development interactively shape life history, population demography, and phenotypic variation in isopods. However, the work continues as new questions emerge and the isopod-community becomes more connected (visit https://asellus.org).

Findings from this and other work on the relevance of isopod pigmentation and development are summarized in a review article on A. aquaticus that we published in 2021 (Lafuente et al. 2021).

Lürig, M.D., and Matthews, B. (2021). Dietary-based developmental plasticity affects juvenile survival in an aquatic detritivore. Proceedings of the Royal Society B: Biological Sciences, 288(1945), 20203136.